With the right features such as BTU and Hopper Capacity, among several others, a grilling unit’s efficiency could be easily analyzed.

Both have the same basic features, and there isn’t any significant difference in their prices.

So, to know what you’re looking for in a product before buying it becomes important in such a case. In this review, I’ll tell you about how I see and compare these products based on my observations.

Let’s get to know both the candidates first; 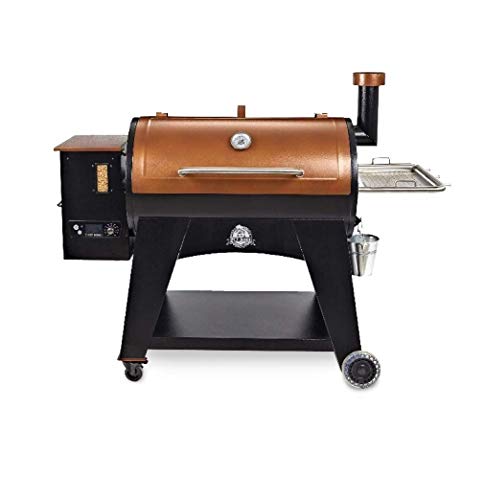 The Pit boss Austin XL  is a pellet grill quite suitable for those trying out smoke cooking for the first time.

I personally find this pellet grill quite easy to work with given its two different thermometers, and the light metal body does not overload the machine too much.

Compared to other competitors in the market, I find this one quite affordable than the rest (starting around 500 USD selling price on Amazon).

However, as the Pit Boss uses very small pellets, the pellet smoker becomes heated up in quite a short time, a feature not much common in other pellet grills.

The Pit Boss Pro Series 1100 comes with two cast iron tiers with a wide grilling space of 1100 square inches. The pellets are all-natural, and the flavors infuse well in 8 styles of cooking.

It has a dial-in temperature range with a digital control pad and meat probes for added efficiency.

The heavy-duty steel craft adds to the weight of the machine.

The device also comes with a fan force convection cooking and an automated starting up and cooling down feature.

This would typically be better for use for people who are looking for some heavy-duty cooking.

Now that we know the candidates, let’s begin the review;

Size For The Grill

The Pro Series 1100 is the most capacious wood pellet grill from the brand, which has two cast iron tiers and an 1100 square inches space for grilling.

I found it to be quite handy that it is suitable for eight different types of cooking.

I find it quite useful that 1100 series from the Pit Boss comes with an automated system allowing better temperature reading for the meat being cooked, one feature I did not find to be of much use in the Austin XL series.

Also, its heavy-duty design makes it convenient opposite the Austin XL series when it comes to weight.

For the Austin XL series, I feel there are fewer temperature settings on the dial, which can make it a bit difficult, especially while following recipes from different cookbooks. 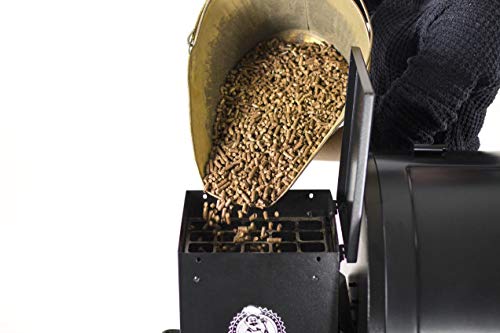 The machine in the Austin series provides a total of 20,700 BTUs for efficient cooking, while on the other hand, the Series 1100 is of double BTU value – 40,000 units.

The BTU is related to the total heat output of the machine on burning the fuel. This means you get thorough cooking with a higher BTU.

However, the problem with pellet grills of a high BTU is that they consume fuel more quickly than the machines with a low BTU.

So, if you want to follow a cost-effective approach, going for Austin series might be more favorable for you.

Hopper capacity is the total weight of pellets when it comes to a smoking machine.

The two models slightly differ when it comes to the hopper capacity with Austin XL of 31 pounds and 1100 Series holding pellets up to 35 pounds.

The higher the hopper capacity, the lesser you will have to reload the machine with the fuel for cooking. So, the 1100 Pro Series has a slight edge over the other.

Both machines use locking caster wheels for efficient moving, so it’s a tie here.

The Austin XL series has to be assembled manually with adjustable screws given.

However, I found this a little bit inconvenient as the screws are quite brittle – not the quality I would expect from a big manufacturer like Pit Boss.

On the other hand, the 1100 Pro Series comes with an advantage with assemblage on delivery, so it pretty much saves time and effort of the user.

However, it is a bit too heavy, given its heavy covering, which is a bit difficult to lift.

I really liked how the 1100 Pro Series comes with an external handle for better safety, which is often ignored in slow-cooking methods.

Although it makes the whole machine a bit too heavy to relocate, the safety that comes with the handle is quite a relief.

I would have to praise Austin XL Series with its lightweight model that makes it even friendlier for beginners.

However, the grill gets too hot, and it becomes especially risky when you are using alcohol (inflammable) while cooking.

Since PB 1100 is more fitted for advanced level BBQ treats, I would expect it to have an adjustable charcoal tray and removable ash catcher, so it does not intervene slow cooking.

However, these features are absent in the machine, which might make me reconsider buying such a unit.

So, I won’t really comment on the cost-effectiveness of this product.

However, I am quite positive about the Austin XL model as it pretty much covers the characteristics I would want from a beginner level machine with an exception on the no-assembly part.

Let’s conclude the good points from both products in a table.

If I am a beginner or trying cooking in my backyard or patio for the first time and need to do a little experimenting, I would invest in getting a Pit Boss Austin XL model.

Actually, it comes down to two factors while comparing these two: cost-effectiveness and accuracy in temperature.

As mentioned, I would go for the Austin series when it comes to cost-effectiveness.

However, I would not take the risk if I want to attain specific temperatures for the meat I cook.

So, the Pit Boss Pro Series 1100 will be my choice in that matter.