( Disclaimer : We hope you love the products we recommend! We just want to inform you in advance that, if you buy anything that we recommend here, then we may get some share or compensation from the links on this page.)

Nobody wants to wash multiple pans after dinner each night. So, one pan cooking quite popular nowadays.

But do you know what’s my secret of one-pan cooking? Any guess?

There are a lot of advantages to cooking with cast iron such as great thermal density, cooks your food at perfection, ease in cleaning, natural iron addition into your food, long-lasting, and extremely versatile… the list is endless!

If you are a beginner or an experienced chef, cooking with cast iron skillet is always a satisfying experience!

I always use my cast iron skillet for cooking my food.

One day, I noticed some black coating coming off my cast iron skillet.

But didn’t know what was that stuff. So, I was looking for ways how to fix that issue with my cast iron skillet.

After researching a lot, I got to know some essential things about cast iron skillet.

Here we will take a deeper look into it and get to know more about cast-iron skillet and its black coating.

Why Cast Iron is Black?

Basically, cast iron is iron alloyed with the majority of the carbon and little amount of silicon. The carbon source is like coal i.e. black.

If you buy a cast-iron skillet which is not black, you need to season it with oil at first.

When you season a pan there is a controlled burn of oil in such a way that it leads to deposit a huge amount of carbon into the surface of the skillet.

It makes a thin layer of hardened oil like a film above. Because of that film food won’t able to stick to the surface of the cast iron.

Want to make a flan? Then try out these pan.

What is Black Coating on Cast Iron skillet? 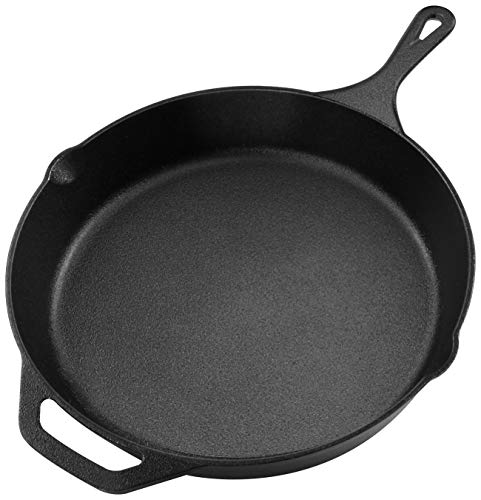 Most of the time when you cooking food with cast iron, you will get black stuff.

But did you know, what is that black coating?

When you going to shop for cast iron skillet, you will find most of them in black color.

These are the cast iron pans taken care of by its owner/manufacturer with regular seasoning. Cast iron pan needs to be seasoned regularly for keeping them in good condition.

Mainly cast iron is silver in color if polished and not rusted. It turns brown and then darkens to black as it seasoned regularly.

The seasoning process leaves behind the jet-black coating. It helps to prevent rusting and creates a non-stick surface.

After cleaning the cast iron pan, you need to season it. For seasoning a pan, you have to heat the oil in cast iron skillet. When oil reacts with the iron it creates the visible black layer on skillet.

You can also season a cast iron with an oven. Add a layer of oil to the cast iron skillet and bake in the oven for an hour.

This is what we call the black coating on cast iron skillet.

Try out these pan for frying potatoes perfectly!

Is Black Coating Dangerous When Cooking with Cast Iron?

If you are not using your cast iron pan just because that black coating coming off, then don’t afraid to dip your toes into cooking with cast iron.

It is just fine to use that cast-iron pan even the black coating coming off as it won’t hurt you at all.

But if you are not sure about the source of seasoning, it is better to remove that commercial seasoning and start over from scratch.

But did you know why you need to remove old seasoning?

Following are some reasons you need to remove old seasoning of your cast iron skillet:

1. If your cast iron skillet is new but already seasoned, you shouldn’t trust the manufacturer’s seasoning. You don’t know whether is it food grade, clean or toxic.

2.If you got your cast iron skillet from an antique store or other sources where the seasoning did from an unknown source or not trustworthy.

Get to know here how to fix grey spots on cast iron skillet.

Why Does Black Coating Coming Off My Cast Iron Skillet?

When you use new cast iron, sometimes black coating coming off which gristle on your food. It’s just because of seasoning as I said above.

If you won’t use your cast iron pan for and won’t season it, it starts to flake off the pre-seasoning coating.

So, it is essential to season the pan regularly to avoid rust and flaking off the black coating.

How to remove Commercial Seasoning of Cast Iron Skillet and Start Over From Scratch?/

How to Fix Black Coating Coming Off My Cast Iron Skillet?

1. Scrub the pan with Scotch Brite to loosen the dirt, burnt food, or anything that comes free with the Scotch Brite.

Scrubbing off helps to decrease the smell and smoke.

2. After scrubbing the skillet clean, keep it in the oven. Run the oven through a clean cycle.

It depends upon how fast your oven gets hot during cleaning.

3. When oven cleaning is going on don’t leave your home.

The cleaning cycle should be done under observation.

4. The heat of the oven burns everything off your cast iron, once the oven will cool down, look inside.

You will notice the cast iron turned very much bright but it turns dull grey color which is the natural color of iron. When iron cools off, it turns to orange color.

The orange color is the outcome of iron-oxidizing a layer of rust on the surface.

This occurs because iron being so hot and then get contacted with cool air and become cool.

5. When the skillet gets cool, take out from the oven and keep it in the sink. Scrub the rust with a new Scotch Brite pad.

Be careful while scrubbing now. Because bare cast iron is very abrasive than seasoned cast iron. Rinse it thoroughly.

6. Start the oven and set the temperature 385 degrees F. Keep again the skillet in the oven. Allow the heat to remove the moisture of the cast iron skillet.

7. Once the skillet gets hot, pick the pan with a dish towel and place it on the stove.

Toss a tablespoon of seasoning fat or oil in the skillet.

Flaxseed oil is the great option to season your cast iron. Personally, I always prefer the flaxseed oil for seasoning. But if you don’t have you can use any vegetable oil with a high smoke point.

8. Fold the paper towel by 2inches x 2inches. Smoothen the oil around the interior and exterior of the skillet.

Make sure the oil gets into the cracks, rings, dimples, inside the eye of the handle. Make sure no area left dry.

9. Take a new paper towel and remove all the oil and make the metal dry.

You can feel little oil if you touch it. If you feel so much oil left, then wipe it down.

10. Line the large cookie sheet on the bottom rack of the oven to catch the drips. Don’t use aluminum foil as it may get melted.

11. Keep the cast iron skillet upside-down position on the top rack of the oven. It helps to collect the oil drops drip out than collecting in the bottom.

12. Bake your skillet for 1 hour in the oven. Check after one hour.

If it is not gotten dry completely, then set the timer again or 30 minutes and let again bake the skillet in the oven.

Note the total time it takes because you may need to bake it again for the next step or in the future.

13. Now the pan looks a little darker and looks like olive green. But the seasoning is not finished yet.

14. Put the next layer of oil again. Remove the extra oil. Do the process as we did in the previous time.

It depends upon how much you want to develop the seasoning on the skillet.

16. Once you complete the initial seasoning, pan appears like dark grey but it won’t get that jet black color.

Jet black is the sign of perfect seasoning. You will get that by the time.

But now you are at the starting point of seasoning you want for your skillet.

17. Clean the pan after every use and wipe off with a paper towel.

You can use regular dish soap and green Scotch Brite pad and rub it gently if needed.

It won’t damage your seasoning. After rinsing well, place the pan on the stove and let the water dry.

18. Now you are all done! After each use clean like this and by the time you will get your skillet surface jet black and non-stick.

If black coating coming off from your cast iron skillet, it is just due to seasoning.

If you know about your cast iron seasoning source and if it is from a reliable source you don’t need to worry about the black coating gets into your food.

But if you’re suspicious about the source of seasoning, it is better to start from scratch. Remove off the commercial/ manufacturer’s seasoning and season the cast iron skillet your own.