What do you do when you gather all ingredients for blending your morning smoothie and when you about to start blending in the Magic Bullet blender, the blade is not spinning?

And sometimes you also experience a blade stuck in the middle of blending.

These scenarios are getting you most frustrated, right?

When this happens you wonder, why is my Magic Bullet blender not spinning?

There are myriad reasons for this.

It may happen due to a fault in the motor, activator, or base gear.

In some cases, you need to inspect the shaft and fix it accordingly.

Due to food stuck between the blade or overfilled cup causes blade stuck and won’t spin.

If the blade gets dull, warped, or bent you need to replace it.

Here we will discuss how to fix the Magic Bullet blade that is not spinning and how to prevent this in the future.

Also, we will get to know the reasons why the blades get stuck and the dangers it might cause the blender if not fixed immediately.

Why is My Magic Bullet Blade Not Spinning?

If your Magic Bullet blender blade is not spinning, then there are myriad reasons this happens.

If you are turning on or use your blender for a longer period of time than suggested by the manufacturer.

It may result in blades not spinning.

The Magic Bullet blade won’t turn, if the motor is not working or refuse to turn on.

Sometimes there is an issue with activators due to which the blade is not able to spin.

In some cases, there is a problem with a shaft or blades get damaged or warped.

You should also take care of the quantity of food or liquid while blending. If the cup gets overfilled the blade won’t spin.

The food getting stuck between the blade also may cause the blade not spin.

How to Fix Magic Bullet Blade that is Not Spinning?

Don’t use a blender for longer time

If you are experiencing the Magic Bullet blender blade not spinning, then it may happen due to long usage of the blender.

It is recommended that you should not blend for more than 1 minute.

You wonder, what happens if you use more than 1 minute?

So, prolonged use of the machine can lead the motor to wear out or drains the motor quickly.

It will also affect the blades ultimately.

So, it is supposed that the machine unsafe to use.

Don’t use the blender for more than one-minute for safe side use.

Fix the Motor that is not turning

In some cases, when you plug in the cord in the wall outlet source, the motor refuses to turn on.

You may notice a burning smell too.

If the blades do not turn and there is a burning smell, immediately unplug the power base.

Allow it to cool for an hour.

Once the blender is unplugged, it will cool down. So that the power base will reset.

In this way, you can quickly fix this issue.

There are white activators located on the top of the power base of the Magic Bullet blender.

It helps a blender to blend properly.

If the activators won’t operate even if you secured the cup tightly to the power base, it means there is a problem with the activators.

If the blades fail to spin when the blender cup is in the power base, it means the activators may be stuck.

For fixing this, you need to replace the cross blade with a new one.

If the cup not able to secure tightly and the blades do not turn on, it means activators have some issue or get stuck.

Put on a small amount of warm water to the activators to loosen any dirt inside.

Be careful while doing this as you may get hurt your fingers. 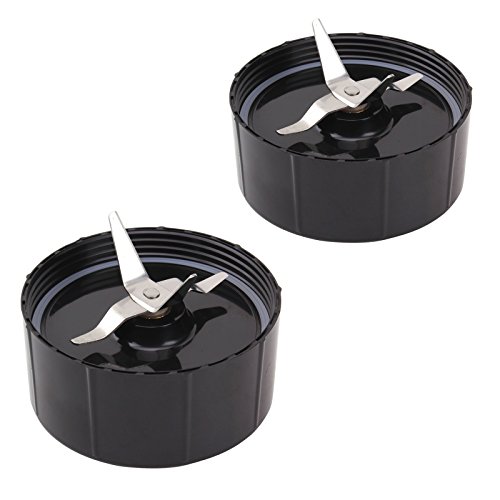 The blades of the Magic Bullet blender may be warped or get dull eventually.

Sometimes they get bent due to faulty usage.

So, you need to replace a blade with a new one.

Replacing the blade on Magic Bullet is quite simple.

To remove the blade, you just need a cloth.

Hold the blade using the cloth. Then turn the gear clockwise at the backside.

Just remember the base is reverse threaded.

The blade will easily pop out and now you can replace it with a new one with just a reverse process.

If you notice your Magic Bullet blades are not turning properly, this may occur due to the gear in the base is broken.

So, you need to replace the base gear of your Magic Bullet.

Let’s get to know how to replace Magic Bullet base gear.

a new base gear replacement

1.You can use a plier to grip the inside of the top of the blender.

2.Remove the sticker that is covering the slit at the center of the bottom.

3.Insert a flathead screwdriver into the slit at the bottom of the blender at the same time hold the piler in place gripped on the gear.

4 . Lay down the blender on its side.

5.Hold the screwdriver stationary to hold the bottom side in its place.

Unscrew the gear by using a plier and turn the pliers CLOCKWISE.

6.Take a new base gear and replace it.

7.For reassembling the blender follow steps in reverse order.

Check out below video that demonstrates how to replace Magic Bullet gears.

If your Magic Bullet blades are not spinning, you should inspect the shaft.

Inspect the inside of the blade where it is connected to the shaft at the top.

Sometimes the shaft has spun out the blade, this also causes the blade not to spin.

Remove the blade and the container. Then turn on the blender and check if the shaft is spinning as the Magic Bullet uses direct drive.

If the shaft is spinning it means that the blade hole has a defect where it is fixed on the top of the shaft.

Check the inside of the blade. You can see some type of damage to the blade like groves are worn out.

So, you need to replace a blade with a new one.

If the shaft is not spinning it means you need to replace a shaft with a new one.

But usually, blades get damaged first than the shaft.

Food gets stuck between the blades

If the frozen or hard food is stuck between the blades, the Magic Bullet blades get stuck and not spinning.

For fixing this problem, you need to unplug the blender from an electrical outlet.

So, it can’t turn on and cut or harm you.

Remove the extractor blade to clear any hindrances or food build-up.

Once you remove stuck food inside the blade, the blade will spin freely.

There are a different size or capacity cups come up with Magic Bullet blender.

It is recommended to fill those cups below the ‘MAX’ line.

So, you should find out those max lines and fill a cup with food and liquid below the max line.

The blades get stuck or do not spin due to overfilling the cup.

If your food or liquid surpasses the MAX line, transfer the food to another cup and blend it separately.

Then replace the cup in the blender and blend the food again.

Now you know how to fix your Magic Bullet blender if the blades are not spinning.

Don’t get worried if the blades of your blender not spinning.

Though there are myriad reasons for not turning the blade, but the good news is there are several ways to fix it.

You can fix your blender with above- mentioned ways easily and enjoy your drink with your favorite Magic Bullet.

Can You Put Ice in Magic Bullet Blender?

Can You Blend Hot Liquid in  Magic Bullet Blender?

How To Fix Magic Bullet Blender Smells Like Burning?

How To Change Magic Bullet Blade And Base Gears?