We know that homemade foods are the best of all kinds.

They are made with love and care rather than for money.

But what about refreshments and drinks? Same thing.

We prefer homemade drinks and smoothies over the ones that are made in restaurants.

That is because homemade drinks are purely organic fresh and not to mention, very refreshing.

Fresh ingredients and the right recipe.

True but more importantly, the blender. How?

Well, how do you expect to mix up all those ingredients perfectly?

Speaking of blenders Vitamix is one of the most trusted blender companies and their blenders have been serving people in their homes with reliable services.

Two of their best models are the Vita Prep 3 and the Vitamix 5200.

Both of them have the same user interface and functionality.

But then what are the differences between these two models?

Which one is the best?

Here is our Vita Prep 3 vs Vitamix 5200 comparison and key differences to help you understand these blenders and pick the right one.

Table Comparison Between Vitamix Turboblend VS and Vitamix 5200 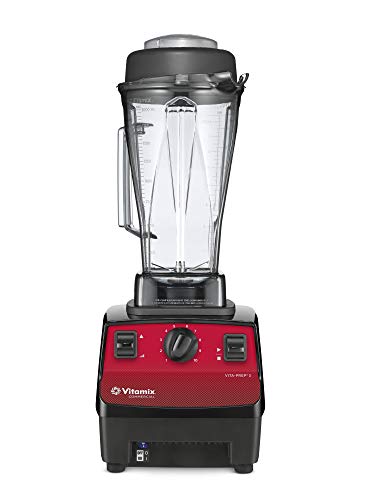 No design-wise but power output-wise.

All the Vitamix models are way above other blender brands in terms of power output and top speed.

But with their new Vita Prep 3, Vitamix has set a new bar for blender motor speed.

Before Vita Prep 3 was made, the top speed blender which was the Vitamix 750 peaks out at 2.2 hp.

This blender has a built-in motor cooling fan.

So, there is no need to hold back using it.

Use it as much as you want, the fan will keep the motor cool and running.

Other than speed and cooling, the Vita Prep is pretty similar to Vitamix 5200.

It features a 64-ounce classic container and a tamper. The user interface is manual.

There is an on/off switch, a speed dial with 10 outputs, and a high/ variable setting switch.

One of the unique features that make the Vita Prep 3 a better blender is that the settings automatically return to low settings after use.

This is very helpful for dealing with the unexpected speed burst that you would get from starting the blender at top settings.

As we said before, the Vita Prep 3 and the Vitamix 5200 are similar but there are some differences both in function and look.

The first difference is power.

The Vitamix 5200 max outs in 2 hp which is significantly less in comparison to Vita Prep 3.

It does not come with a built-in cooling fan.

So, you must keep a limit for using it in one go.

But the motor is powerful enough to reach the speed of heating the liquid with heat friction.

It takes 90 seconds with the highest settings to heat the liquid.

Now the visual difference is the color.

The Vitamix 5200 has a plain black finish with a silver border in some parts.

The speed dial is a little different to look at. It has a thinner indicator.

The dials and settings don’t switch back to low settings automatically.

Now let us do a more detailed breakdown of the key differences between the Vita Prep 3 and the Vitamix 5200.

Both of them are very expensive and way above the blenders of other brands.

So, the only competitors they have are each other.

They may look very close to each other but the difference is pretty big.

It starts with the motor output and ends in their package included accessories.

The first key difference between the two blenders is their power output.

In this case, the Vita Prep 3 comes out on top.

The Vita Prep 3 has a motor that can reach 3 hp of speeds just like the 3 in its name.

With that much power, it can produce 37500 RPM that can cut and blend any ingredient you throw at it.

From thinnest to thickest and to from medium to the tiniest of ingredients, Vita Prep 3 can deal with them all.

But just like its high-power output, it also needs a high amount of electricity to operate.

Now let us talk about the power of the Vitamix 5200.

It also has beaten other brand blenders in terms of power but in comparison to the Vita Prep 3, it falls short by 1 hp.

So that would not put much of a difference between the two.

As for normal home usage, both blenders will do good.

But for professional usage, the Vita Prep 3 is the better choice because why settle for something low when you have something better in your arms?

There is a lot of difference in features between the two blenders but two of them stand out to us.

One is the automatic switch down on the controls and the other is the cooling fan.

The Vita Prep 3 has both of them. The cooling fan keeps the motor cool and running in busy times.

So, there is no need for holding back.

On the other hand, you have to keep a limit on your usage of the Vitamix 5200 on one go.

So, for continuous heavy usage, the Vita Prep 3 is the better choice.

The automatic switch down is also a great function and saves you from lots of troubles.

In Vita Prep 3, the settings automatically switch down to the lowest settings, saving you from an unexpected liquid spilling situation.

This function is not to be seen in the Vitamix 5200.

So be prepared for some unexpected situations in the kitchen with that.

Warranty is a very important part of accessories.

Because electronics can break down at any moment without warning.

With a warning, you will be able to get some security for repairing those devices free of cost.

And having such expensive powerful blenders, a warranty should be something worth considering.

Both of the blenders have different warranty conditions.

The Vitamix 5200 has a 7-year warranty, which is the longest warranty you can get on a blender.

The warranty applies for all types of repair of the blender and there is absolutely no cost.

The shipping cost will be paid by Vitamix.

But things don’t look much better with the Vita Prep 3 in case of warranty.

It has a 3 years warranty on components and the rest is covered by a one-year warranty.

And yes, there is no service charge for shipping.

Now we have reached the conclusion of our Vita Prep 3 vs Vitamix 5200 review.

Picking a winner among them is a bit tricky.

If money is not a problem and you are looking for powerful technologies, we would recommend you the Vita Prep 3.

But if you are OK with a little low power and more concerned about security, go for the Vitamix 5200.

How to Fix Vitamix Blade that is Not Spinning?

How to Fix Vitamix Stuck on High Speed?