Noodles are arguably the most popular comfort food out there.

With several kinds of noodles available currently, Yakisoba and Chow Mein seem to have taken the spotlight in many countries.

However, what is the real difference between Yakisoba and Chow Mein?

Well, the noodles are pretty much the same except for tweaks of difference in their recipe and the taste.

In addition to that, there might be a few differences in the preparation and ingredients involved, but those aren’t quite evident to the tester.

After all, the taste is what sets one noodle apart from another.

Continue reading to know more about the battle of noodles- Yakisoba Vs Chow Mein! 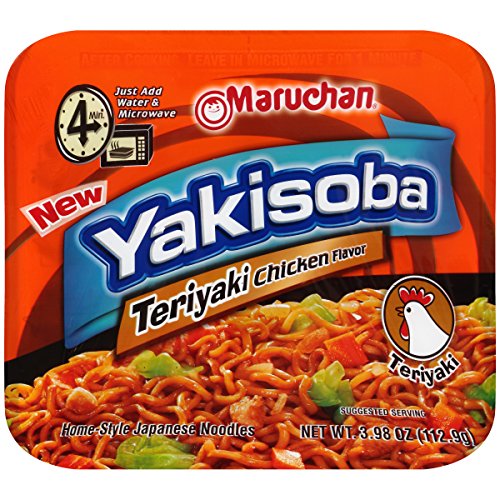 Yakisoba noodles refers to fried noodles in a stir-fried dish.

These noodles are typically made from wheat flour and have a special sauce to compliment the taste.

Moreover, this dish happens to be quite famous in Japan, with most food stalls offering this; it’s a tourist special.

The Yakisoba noodles can be a main dish or a side dish, depending on the manner of feast.

With chicken and fresh vegetables, Yakisoba is easy to prepare and served fresh.

However, you can prepare Yakisoba with leftovers as well; the noodle is quite versatile.

Confused about what to have for dinner?

Whip up some Yakisoba noodles and enjoy!

Alongside meat, Yakisoba noodle is also served with fish or other garnishes.

Wherever you’re from, you can modify the recipe for Yakisoba noodles into something of your liking.

The minimal preparation time is what makes the noodles even more appetizing.

Don’t forget the Yakisoba sauce, though.

What is Chow Mein? 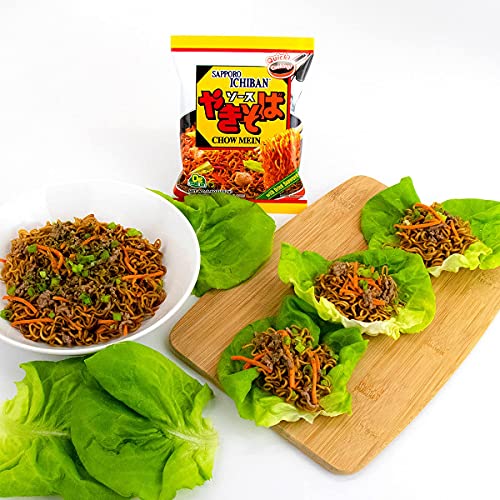 Literally translating to ‘stir-fried noodles’, Chow Mein has been a staple across the world for decades- the most common type of noodle known to mankind that has generated from China.

The Chow Mein was initially paired with tofu or meat, but as time progressed, each country developed their personal flavor of Chow Mein.

The simple recipe of Chow Mein tends to appeal to everybody.

Wishing for something that’s easy to cook but tastes heavenly?

You get two words as the answer- Chow Mein.

While ‘Mein’ translates to noodles, all types of noodles can be whipped up into Chow Mein; there are no specific kinds of noodles for the recipe.

Meat, fish, even eggs are used for Chow Mein- making it one of the most versatile dishes around the world.

The blend of sauteed vegetables and the noodles mixed together is a people’s favorite.

Moreover, the preparation time is less than any other kind of stir-fried noodles.

Yakisoba and Chow Mein are quite similar to each other, and are even used as substitutes for each other.

However, there are quite some differences between the two.

For somebody who is not into noodles at all, figuring out Yakisoba Vs Chow Mein might be quite challenging; the two have similar preparation as well.

Note the detailed differences between the two below- for the noodle fans out there!

First and foremost, the origins of the two noodles are different.

Chow Mein originates from China; it is a traditional Chinese dish.

It was first developed in Guangdong, a state in China which basically served the noodles with tofu.

Later, variations including meat, fish, pork, vegetable, and shrimp were spotted all across the country.

On the other hand, Yakisoba generates from Japan.

The Japanese dish developed from buck wheat, along with a Worcestershire sauce.

As time passed, Yakisoba noodles were made from wheat flour as well with several variations of the sauce.

The dish emerged mainly after the World War 2.

Yakisoba happens to be made from wheat that is grilled before adding to the main ingredients.

This makes the noodles soft and chewy; perfect combination with the sauce, vegetables, and meat.

Chow Mein, however, is crispy and tends to be fried till crips before being added to the components.

This makes the noodles crack in your mouth and emit a slight crunch.

To an outsider, the crunch might be easy to neglect or not notice but to a person who has had noodles for most of their lives, it makes the world of a difference.

Many arguments state how Yakisoba noodles are easier to eat and chew, making it easier to digest.

On the other hand, Chow Mein favorers are all in for the crisp and lower number of carbohydrates in the noodle.

The sauce is what distinguishes the two noodles.

It stands to be the main components of the battle Yakisoba Vs Chow Mein. Moreover, this is why the preparation time differs between the two.

The sauce used in Yakisoba tends to be of a tangy taste.

It is made to emit the citrusy flavor within the noodles, making it sweet and sour.

The sauce is prepared with soy sauce, ketchup, Worcestershire sauce, sugar, and sriracha.

The sugar adds a hint of sweetness while the sriracha adds the kick of spice.

When mixed together, they make the ideal Yakisoba sauce to go with your noodles.

Speaking of stir-friend noodles, Chow Mein does not have a sauce to go with it most of the time.

If it does, however, the sauce is prepared mixing flour and soy sauce.

Keep in mind, Chow Mein is aimed to make your life easier by taking less time to cook.

As a result, there is no fancy sauce accompanying the noodle composition.

You simply add the soy sauce and flour-made sauce to the ingredients and voila!

You have your Chow Mein.

The absence of sauce helps reduce the number of calories and fat in your serving as well.

Next up, let’s discuss how the meat is prepared for Yakisoba Vs Chow Mein.

Both of these are made with either chicken, beef, or pork- whichever pleases your taste buds the most.

For the Yakisoba chicken, you have to marinate the chicken beforehand with spices.

Following that, you cook the chicken in thin strips till it’s cooked well.

To top it off, you can add the chicken to the noodles with the sauce mixed overall.

For Chow Mein, no marination period is required.

The chicken or meat needs to be cut into strips.

Add the spices to the strips and stir-fry them for the noodles.

However, the meat for Chow Mein needs to be kept half raw before adding the noodles.

Since the noodles shall be fried, the chicken will burn if fried completely beforehand.

As a result, the meat is cooked half, and then the other half is cooked with the noodles.

A wok is needed for Chow Mein, as it’s a tradition.

Without a wok, your Chow Mein might not turn out the way you wanted it to.

For Yakisoba noodles, however, no wok is required.

They can be grilled and stir-friend in a regular pan as well.

As mentioned earlier, Yakisoba needs to be soft.

Hence, the stir-frying technique needs to make sure the noodle stays soft at the end of cooking.

Hence, less time is allocated to stir-fry the noodles.

Just mix the sauce, meat, and vegetables to the noodle and you’re done.

With Chow Mein, you need to stir-fry longer to ensure the crispy texture.

As a result, Chow Mein is fried longer with all the components mixed to develop the slight crunch in the noodles.

The overall recipe for both the noodles is quite different.

The steps and the order in which you have to prepare the noodles are different and that’s what creates the main distinction.

Moreover, the recipe differentiates between the calories, fats, and proteins in each serving as well.

Last but not the least, the resulting flavor of Yakisoba is quite separate from that of Chow Mein.

While Yakisoba has a tangy taste with a sweet and sour after taste, Chow Mein tends to be more on the savory side.

Choose if you’re a sweet-sour lover or a spice lover- and you can make your pick!

What is yakisoba sauce made of?

Yakisoba sauce is sweet, savory, and tangy in taste.

The sauce is very much easy to make at home in just 5 minutes.

What can you substitute for Yakisoba noodles?

The buckwheat ramen noodles are the most perfect substitute for yakisoba noodles.

You can also use ramen noodles as a substitute for yakisoba noodles because they both are similar textures and tastes.

You can also use Japchae which is Korean Stir-Fried Glass Noodles, Korean Spicy Noodles, Yaki Udon Noodles as a Yakisoba noodles alternative.

Are Udon noodles the same as Yakisoba?

Yakisoba noodles are round in shape but much smaller and thinner than Udon noodles.

Is Yakisoba the same as Lo Mein?

Yakisoba is the Japanese version of the Chinese stir fried noodles, Lo Mein. Both types of noodles are stir fried soft noodles. They are both stir fried with vegetables, and both have soy sauce-based flavor.

They look almost the same but Yakisoba tastes different from Lo Mein. Yakisoba is similar to its Chinese cousin Lo Mein. But there is little difference in both.

Because of the different flavors in the sauce.  Yakisoba has a more complex taste than lo Mein as it’s not just soy sauce, sugar, and ginger as in the case with most Lo Mein.

Are Hakka noodles and Chow Mein the same?

Hakka noodles and Chow Mein are both noodle dishes of China.

The style of cooking makes the difference between the two.

The Chow Mein is generally cooked in the style set by the ancient Taishanese, or the people living in the modern day Taishan regions of China.

Whereas Hakka noodles are cooked as per the Hakka cuisine style.

Chow Mein is one of the most popular offered by Panda Express.

In 2019 Panda Express changed the recipe for making their Chow Mein.

They replaced the chicken broth with vegetable stock in their recipe. So, now the Chow Mein dish offered by them is vegan.

Is Chow Mein the same as noodles?

So, all Chow Mein are noodles, but all noodles are not Chow Mein.

Noodles are basically made from dough, whereas Chow-Mein is a dish made with noodles when they are fried.

The Yakisoba Vs Chow Mein can go on for ages, as more modifications come out of their recipes.

Chefs across the world are trying to click that perfect recipe to make the ideal noodles for you.

While a bunch of other stir-fried noodles exist, the most talked about ones tend to be these two.

Aside from their comforting taste, noodles are versatile and easy to cook.

Along in Thanksgiving? Make some noodles.

Now that you’ve read all the detailed differences, which one would you choose- Yakisoba or Chow Mein?

Share this article with other noodle fanatics and help them differentiate!

How to Make Knorr Pasta Sides Without Milk?